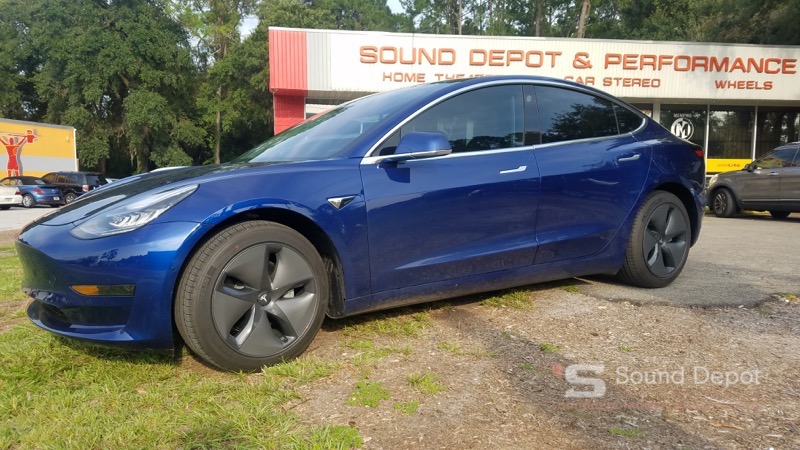 A client from Gainesville recently contacted the team at Sound Depot and Performance to inquire about having the windows of his Tesla Model 3 tinted with 3M Crystalline and Color Stable film. The client had ordered the car in Tesla’s Deep Metallic Blue paint; with its 18-inch matte grey Aero wheels, he wanted the windows tinted to complete the look of the vehicle and help to keep it cool inside. Model 3s can be tricky to tint, but our expert technicians were more than up to the task.

The client’s skin and interior will be protected from the sun now.

The Color Stable film was just what this Model 3 needed!

Our technicians were able to tint the rear window with a single piece of film.

Here’s where the fun began. The Model 3 rear window extends from the trunk lid up and over the rear seating area, stopping in the middle of the car in line with the B-pillars. This gigantic piece of glass has some factory tint in the horizontal section to serve as a division between what would be the roof and what would be considered the rear window. The client wanted the whole thing tinted.

Most shops can handle this request without any complaint, but they use two pieces of film. The result is a seam near the transition from the clear to tinted glass. Our tint technicians tinted the entire rear window and roof assembly with a single piece of 3M Color Stable 20% film for a truly seamless, factory-installed look.

The final touch was to tint the front window with 3M Crystalline CR70 film. Crystalline is a ceramic film that blocks 97% of the heat-producing IR energy (in the 900- to 1,000-nanometer range) from the sun. The result is a much cooler interior. What makes Crystalline unique is that it still allows most of the visible light into the vehicle. CR70 film has a 69% Visible Light Transmission rating, so the driver can still see safely at night.

With the installation of the 3M Color Stable and Crystalline film complete, we called the client to let him know the vehicle was ready. He loved the way the car looked with the tinted windows and was impressed that we were able to do the rear window with one piece of film. If you are in the Gainesville area and are interested in having your car or truck’s windows tinted, drop by our store or fill out our online window tint request form. 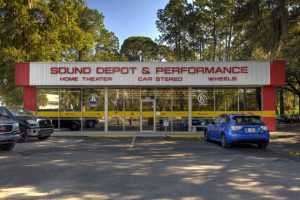 Here at Sound Depot & Performance, we work hard to earn your valued business. We know you have many choices when seeking automotive electronics, … END_OF_DOCUMENT_TOKEN_TO_BE_REPLACED 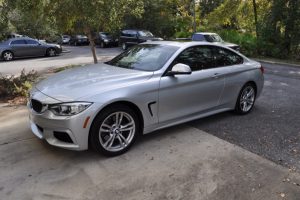 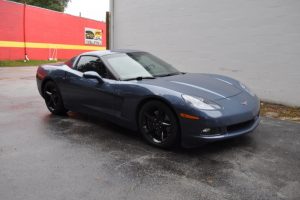 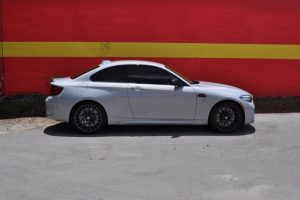 A local dealership recommended their customer contact us about upgrading his brand-new 2019 BMW M2 with some high-quality window tint. He wanted to … END_OF_DOCUMENT_TOKEN_TO_BE_REPLACED